A member of the terrier family, Staffordshire bull terriers are a breed of dog that originated from United Kingdom. It is descended from dog-fighting ancestors which resulted to its muscular built and courageous temperament.

The Staffordshire bull terrier, also known as Staffy or Staff, is a stocky, medium-sized muscular dog. It is a cousin of the pit bull and the American Staffordshire terrier. It is characterized by its broad head, defined occipital muscles, dark round eyes, a slight overbite, and well-muscled neck and shoulders. Staffordshire bull terriers have gotten a bad reputation as there have been reports of many cases of Staffy attacks. In New South Wales, it is the leading breed of dog that is responsible for biting humans.

Ancestors of the Staffordshire bull terriers used to be involved in bloodsports such as cock fighting, bear baiting and bull baiting in the 19th century. It is a source of entertainment for both the royalty and commoners, and the dogs were trained to be aggressive. When bloodsports were abolished in 1835, secret dog fighting matches became popular and dogs that gave up in the middle of the fight are mockingly called curs. Later on, the dogs were bred to be suitable as a pet. The current breeds have no local fighting history, as they are descended from show dogs that came from the UK.

The coat of Staffordshire bull terriers is short and smooth, as it is easy to groom. To maintain it, you can brush it using a firm bristle brush every day. For a shiny coat, you can rub it with a towel or a small piece of chamois.

Staffordshire bull terriers are affectionate dogs and are suitable for families with children, provided that every member of the family must display strong leadership with regards to the dog.  They show affection through jumping up, licking, nuzzling and pawing. They are fearless dogs and because of their affinity for people, they are not suitable guard dogs.

A Staffordshire bull terrier is an extremely energetic dog and will do well in a house with a yard. It can also live in an apartment provided that the owner exercises the dog regularly.

The Staffordshire bull terrier can suffer from genetic hereditary flaws and two of these can be screened by DNA testing: hereditary cataracts, and L-2-hydroxyglutaric aciduria (L2HGA) which is a metabolic disorder that can result in behavioral changes and have dementia-like symptoms. Owners should also watch out for distichiasis or double eyelash, persistent hyperplastic primary vitreous which is a condition characterized when the blood supply to the ocular lens fails to regress which can lead to a hazy vision. They can also suffer from gas and hip dysplasia. Life expectancy of a Staffy is 10-16 years.

The Staffy is an extremely athletic dog with a tremendous stamina. It needs plenty of exercise and the owner must walk the dog daily.

The Staffy is an intelligent breed but can be stubborn at times so training it requires a firm hand and patience. Trainers must establish themselves as pack leaders and establish rules and routines the dog must follow every day. Chew toys are encouraged for puppies. 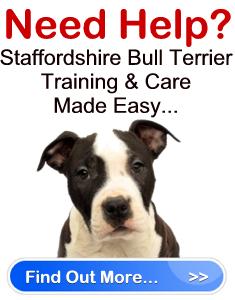